"After the SPD supported German involvement in World War I in 1915, Luxemburg and Karl Liebknecht co-founded the anti-war Spartacus League (Spartakusbund) which eventually became the KPD. During the November Revolution, she co-founded the newspaper Die Rote Fahne (The Red Flag), the central organ of the Spartacist movement. Luxemburg considered the Spartacist uprising of January 1919 a blunder, but supported the attempted overthrow of the government and rejected any attempt at a negotiated solution. Friedrich Ebert´s majority SPD government crushed the revolt and the Spartakusbund by sending in the Freikorps, government-sponsored paramilitary groups consisting mostly of World War I veterans. Freikorps troops captured and summarily executed Luxemburg and Liebknecht during the rebellion. Luxemburg´s body was thrown in the Landwehr Canal in Berlin." - (en.wikipedia.org 22.10.2019) 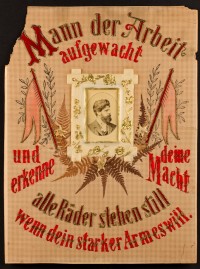