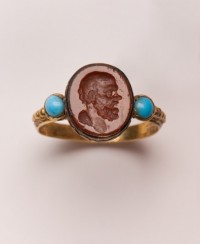 "Socrates (/ˈsɒkrətiːz/; Ancient Greek: Σωκρᾰ́της, romanized: Sōkrátēs, [sɔːkrátɛːs]; c. 470 – 399 BC) was a classical Greek (Athenian) philosopher credited as one of the founders of Western philosophy, and as being the first moral philosopher of the Western ethical tradition of thought.An enigmatic figure, he made no writings, and is known chiefly through the accounts of classical writers writing after his lifetime, particularly his students Plato and Xenophon. Other sources include the contemporaneous Antisthenes, Aristippus, and Aeschines of Sphettos. Aristophanes, a playwright, is the main contemporary author to have written plays mentioning Socrates during Socrates´ lifetime, though a fragment of Ion of Chios´ Travel Journal provides important information about Socrates´ youth.[10][11]" - (en.wikipedia.org 08.11.2019)