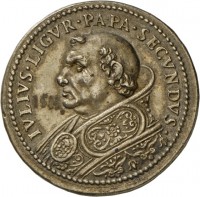 "Pope Julius II (Italian: Papa Giulio II; Latin: Iulius II) (5 December 1443 – 21 February 1513), born Giuliano della Rovere, was head of the Roman Catholic Church and ruler of the Papal States from 1503 to his death in 1513. Nicknamed the Warrior Pope or the Fearsome Pope, he chose his papal name not in honour of Pope Julius I but in emulation of Julius Caesar. One of the most powerful and influential popes, Julius II was a central figure of the High Renaissance and left a significant mark in world history.

Julius II became Pope in the context of the Italian Wars, a period in which the major powers of Europe fought for primacy in the Italian peninsula. Louis XII of France controlled the Duchy of Milan, previously held by the Sforza, and French influence had replaced that of the Medici in the Republic of Florence. The Kingdom of Naples was under Spanish rule, and the Borja family from Spain was a major political faction in the Papal States following the reign of Alexander VI. The Archduke of Austria Maximilian I was hostile to France and Venice, and desired to descend in Italy in order to obtain the Papal coronation as Holy Roman Emperor. The conclave capitulation preceding his election included several terms, such as the opening of an ecumenical council and the organization of a crusade against the Ottoman Turks. Once crowned, Julius II proclaimed instead his goal to centralize the Papal States (in large part a patchwork of communes and signorie) and "free Italy from the barbarians"." - (en.wikipedia.org 30.01.2020) 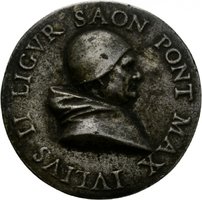 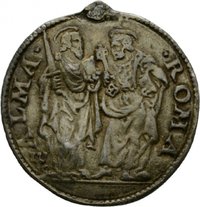