When John II came to power, France was facing several disasters: the Black Death, which killed nearly half of its population; popular revolts known as Jacqueries; free companies (Grandes Compagnies) of routiers who plundered the country; and English aggression that resulted in catastrophic military losses, including the Battle of Poitiers of 1356, in which John was captured.

While John was a prisoner in London, his son Charles became regent and faced several rebellions, which he overcame. To liberate his father, he concluded the Treaty of Brétigny (1360), by which France lost many territories and paid an enormous ransom. In an exchange of hostages, which included his second son Louis, Duke of Anjou, John was released from captivity to raise funds for his ransom. Upon his return to France, he created the franc to stabilize the currency and tried to get rid of the free companies by sending them to a crusade, but Pope Innocent VI died shortly before their meeting in Avignon. When John was informed that Louis had escaped from captivity, he voluntarily returned to England, where he died in 1364. He was succeeded by his son Charles V." - (en.wikipedia.org 31.01.2020) 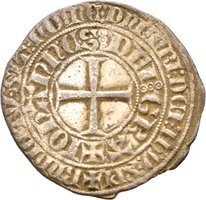