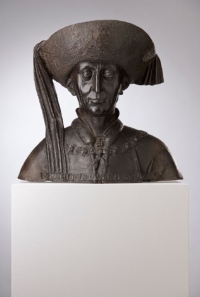 "Philip the Good (French: Philippe le Bon; Dutch: Filips de Goede; 31 July 1396 – 15 June 1467) was Duke of Burgundy as Philip III from 1419 until his death. He was a member of a cadet line of the Valois dynasty, to which all the 15th-century kings of France belonged. During his reign, Burgundy reached the apex of its prosperity and prestige and became a leading center of the arts. Philip is known in history for his administrative reforms, his patronage of Flemish artists such as Jan van Eyck and Franco-Flemish composers such as Gilles Binchois, and the capture of Joan of Arc. In political affairs, he alternated between alliances with the English and the French in an attempt to improve his dynasty´s position. As ruler of Flanders, Brabant, Limburg, Artois, Hainaut, Holland, Luxembourg, Zeeland, Friesland and Namur, he played an important role in the history of the Low Countries." - (en.wikipedia.org 31.01.2020)