"David Beringer (1756 – 1821) was a German scientific instrument maker and craftsman from Dieppe. He took up residence in Nuremberg, where he built many cubic wooden sundials in about 1736. His dials usually bore two signatures: his own and that of G.P. Seyfried, an associate presumably affiliated with one of the local guilds, which Beringer does not appear to have joined." - (Wikipedia (en) 16.01.2019) 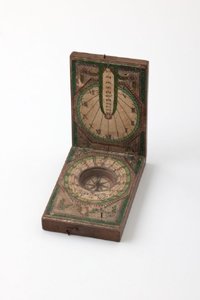