Upon William´s accession, Württemberg was suffering crop failures and famine in the "Year Without a Summer", in 1816. After taking office, he initiated sweeping reforms, resulting in the approval of the Estates of Württemberg to a constitution on September 25, 1819. In his 48-year reign, the kingdom moved from one that was created from different denominational principalities and a heterogeneous agricultural country, into a constitutional state with a common identity and a well-organised management." - (en.wikipedia.org 10.11.2019) 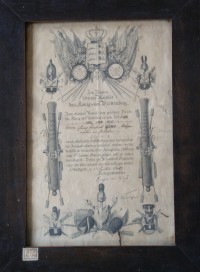